A word from our President. 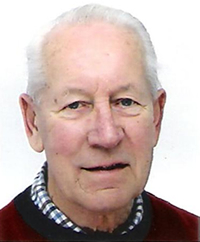 Guildford Hockey Club is proud to have two Presidents with many happy and rewarding years of hockey experience between them, Ian Russell and Maggs Kyte. Ian shares a special word with you here (and we will get Maggs to share her thoughts soon):

"After National Service in 1953, I joined Wallington HC to play in their Fifth Eleven on the right wing. I had not played hockey previously! It was a steep learning curve but four years later I was playing for the 1st Eleven on the left wing. One year later I became skipper of the First eleven playing at right back!

At this time Surrey HA organised its first Club coaching course and as I had not been taught how to play, I volunteered. The course was managed by four England Internationals, who taught me how to play hockey! As I could play mid week I was asked occasionally to play for the Surrey ‘A’ team and that is where I met up with Guildford HC first eleven captain, one Mike Keeling. Mike had heard I was to move house to Godalming in 1961 and immediately ordered me to turn up at GHC, Woodbridge Road (on their superb pitches) for the Club trials and training. I was picked for the position of left wing for the First team. I lasted one year as a much better player that I, Peter Child, joined and played for the Seconds. We swapped teams, much to the relief of Mike!

In my 51 years with GHC, I played for the Seconds, Thirds and Fourth teams. When Tony Bryers Fourth team was moved sideways it became ‘The Gondoliers’ and I played in that team until 2010, when health problems prevented me playing again. We used to play a lot of hockey on Sundays and I formed the GHC Vets team for the European Championships at Willsden named ‘The Friars’. This team took part successfully in European Tournaments. I was also invited to play for the International touring side named 'The Llamas’ and toured the world with that team. They were also the first team to win the HA Veterans Cup. The same year GHC won the HA Cup!

GHC’s First team took part in the Poundstreches League after the London League and others were reformed. Dick Wright was appointed manager and I was his assistant. Our player coach was Ian Jennings! Hamish Ferguson was Captain. I had ten very happy years before we handed over to Tony and Pam Hall.

Meanwhile off the pitch I served on various committees and then was asked to become a management member. This committee had the responsibility of organising the whole Club’s activities. We were also looking for an all weather pitch for the First team to use and at first we played on the School pitch of ‘Park Barn’. Eventually we heard that Broadwater School was trying to fund an all weather pitch at the School. GHC invested in the sand based pitch and Hamish was our leader in the negotiations. Eventually it was agreed with Surrey County Council to let us build the present Clubhouse and on completion we moved from Woodbridge Road.

Whilst all this was going on I had taken a GHC team to the Netherlands to Oirschot for 36 years over the August bank holiday and we had many successful weekends. I also organised the GHC Vets tournament and in 2011 we celebrated our 20th year.

It is an enormous privilege to be appointed your President and I hope that I will be able to contribute to the success of our Club."