Welcome to the Under 14 Boys' page

The GHC Boys Under 14s has been a mainstay of the Guildford Junior Section for a number of years. We have enjoyed great success in all ability levels and will again this season be competing in four different leagues in order to develop and challenge all players.

The stronger players in the group play in the Premier League, giving them the the opportunity to test themselves against the best players in the league which stretches from Oxford to Canterbury and Braintree to Fareham. This team will also play in the England Hockey National Championships (also known as the 'National Cup').

Our middle ability group competes mostly against other clubs' top teams in the surrounding counties; these boys play with true flair and dynamism and perform well in the leagues. Our 'development' teams play a good standard of league hockey, with a firm focus on the development of skills, team play and FUN. These teams also have shown solid performance over the last few years. Click on the icons above to see the league fixtures and results.

The Boys Under 14 age group is the first introduction to regular 11-a-side matches (some may have been exposed at U12); for the younger boys in the age group this builds a solid foundation of team play and how to use individual skills on the larger playing areas. For the older boys in the age group we offer the opportunity to play Men’s hockey on Saturdays (from the age of 13). Good hockey is a fast and skilful game, and exposure to the Men’s game can really helps accelerate a player's development.

Any sport is more enjoyable when it’s fun, and the Guildford ethos is one of a family friendly club that focuses on 'walking off the pitch with a smile'. Having said that, winning can certainly add to the enjoyment of the game, so we always give of our best!

The Club has great coaching, and each season we encourage the boys to develop new skills, and then use those skills in game scenarios. We embrace the England Hockey Golden Thread Philosophy.

We aim to play fast counter-attacking hockey, encouraging players to use their skills in the final third of the pitch. 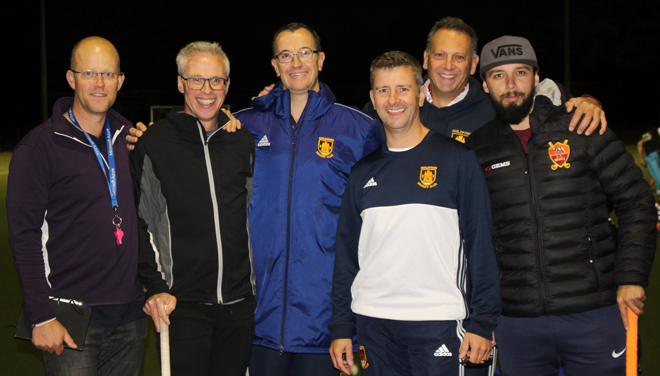 We also have a number of other assistant coaches and are supported by boys from the older age groups who serve as excellent role models for the younger boys.

Every group needs a great organiser and we are very lucky to have Caroline who brings with her years of experience taking care of the organisation and communications that are so important to making the hockey happen.