We have 7 Men’s teams, 5 Ladies’ teams, Mixed hockey and a thriving Junior Section with 600 children from 5 to 18 years old. Our Clubhouse is located at Broadwater School in Godalming with two all-weather pitches and it's busy with training, matches and social events on weekday evenings and weekends.

We pride ourselves on providing an enjoyable and productive hockey experience for all age groups and all ability levels. Please have a look at our website and if you are interested in playing or getting involved. New players very welcome. Come and see why Guildford is A Great Place to Play.

Have a look through our website, glance through our weekly newsletter InTouch and see our Club News for more information and contacts...

Following a terrific 2017/18 season all around, GHC are getting ready for next season.

These three outstanding coaches also work together to share information and learning for the benefit of the club.

Our 2s and lower teams also benefit from coaching sessions mid-week provided. And we will continue to run 'Back to Hockey' sessions for those new to the sport or looking to get back into it after time away.

There are many more plans in process to make 2018/19 another happy, successful season at Guildford. We welcome new players, coaches, umpires, spectators, supporters, etc. Please don't hesitate to .

On 26 May 2018 Hockey for Heroes kicked off their first ever Ladies 'Operation Endure' starting at the National Hockey Centre in Glasgow and finishing on 2 July at Canterbury HC. All proceeds are in aid of the Help for Heroes charity.

This #OpEndure see the Army Ladies hockey team travelled across the UK taking part in 8 military challenges and playing 28 hockey games over 8 days.

The group came to GHC on Friday 1 July for a fabulous day of hockey and physical fitness. See how it all went here in our report.

Thank you to our memebrs who came to AGM 2018 - much appreciated. The Board, Subs Proposal, Budget and changes to the Constitution were voted in.

Meeting minutes will be available soon.

Boys U10 Win Gold and Girls U10 Silver in South Finals

Boys U12 in South Silver, Qualify for National Finals

The Under 12 Boys have qualified for the England Hockey National Finals taking place 12 May in Nottingham! They just missed out on the South Finals Gold medals having been 2-0 up in the Final. Top two teams go to National Finals - good luck to them! Read the South tournament report here.

The Under 18 Boys topped their Premier League table, qualifying for League Finals Day. They won this, too, and were also awarded the Fair Play Trophy. Nice guys finish first. Read the Tournament report here.

Boys U16 in Double National Silver

The Ladies 1st XI went 6 points clear at the top with two matches to play and then in their penultimate match won 4-0 to finish top of the table with one match still to play! This secures promotion to South League 2 for next season. Well done to all - what a super season! Read the match report here

Our newest team has won promotion with still three games to play in its first season in the leagues. The Ladies 5th XI are on 54 points, 11 ahead of their next closest competitors. Well done to all and especially to Club President and Ladies Captain Maggs Kyte who looks after the 4th and 5th XI doing all sorts of jobs to make thing happen week in and week out including playing and coaching.

Under 10 Boys and Girls are Surrey Champions!

Following the Under 12s medals in the Surrey County tournaments, our Under 10 Girls and Boys both won Gold in their respective Surrey Cup tournaments. Guildford Girls also won the Under 10 Surrey Plate - what a weekend, what a season!

Both Cup teams will compete in the England Hockey South Finals on SUnday 6 May. Well done to all involved! 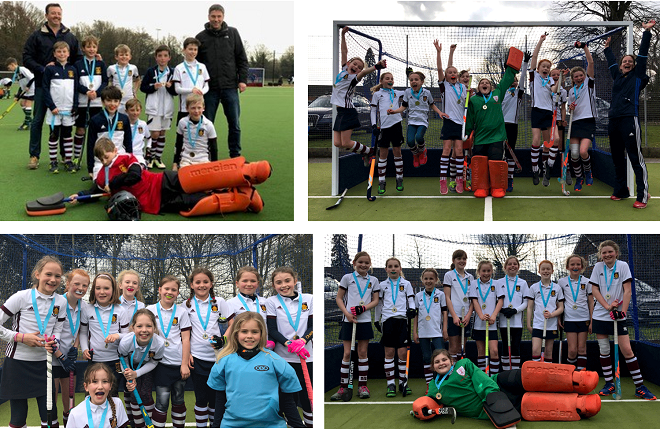 The Under 12 Boys and Girls A teams both earned Bronze medals in the Surrey County Cup Finals. This qualifies the Boys for the South Regional Finals coming up in April.

Also a massive well done and congratulations to the Under 12 Boys B team who won Silver in the Surrey Plate competition. The boys didn't lose a match all day, scoring 16 goals and letting in 0 - though the penalty shoot-out didn't go their way so it is Silver instead of Gold.

The GHC Season Brochure is here - members please collect your copy from your Captain or in the clubhouse.

Have a look at the online version here: 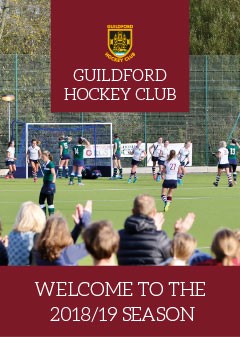